We’ve been working on our fall bucket list a lot this week and decided yesterday was the perfect day for leaf collecting. But first, we needed something to put those leaves in. 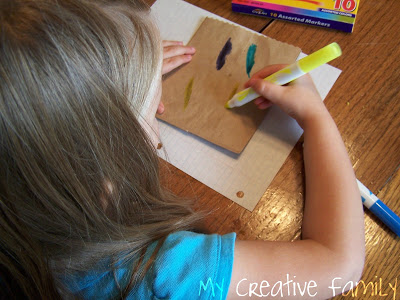 I took brown paper lunch bags and cut them in half. We were only going to use the bottom half.

I used a pair of my craft scissors to get the zig-zag pattern on the top. Then, we got out the markers and the girls started decorating. 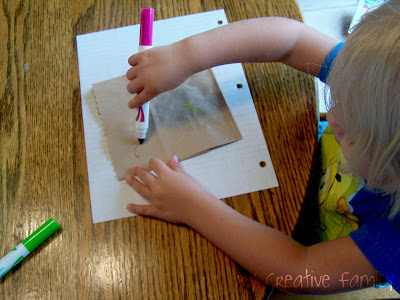 When they were finished, I opened up the bags, punched a hole in each side and added a long length of yarn. It was a windy day, so I wanted the girls to be able to wear them messenger-bag style.

And then, we were off! 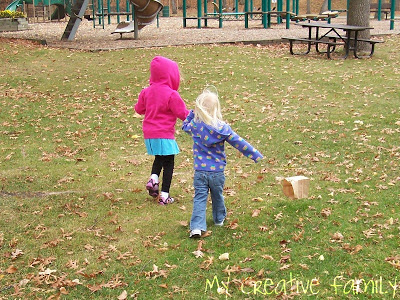 We went to one of our local parks. It is full of trees and has several walking paths. I knew it would be perfect for leaf collecting. 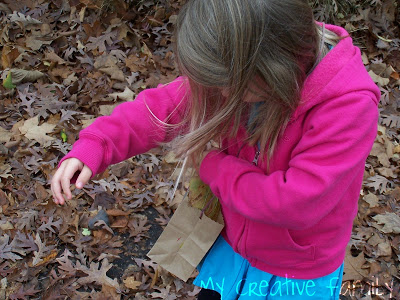 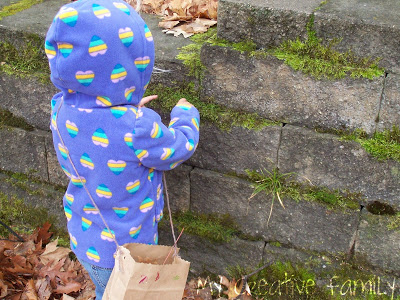 We also stopped and examined the mossy wall. AJ loved touching it! 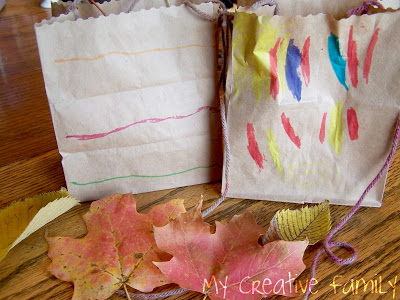 After a lengthy playground stop, we brought our treasures home. They’re now being pressed under heavy books, just waiting for us to have more fun with them! 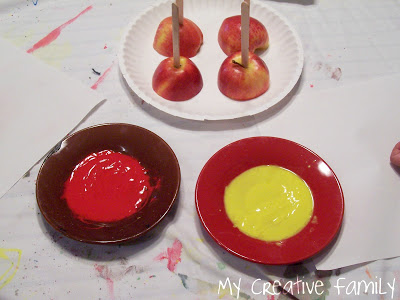 We did another item from our Fall Bucket List recently – apple stamping.I set up the project by cutting a couple of apples in half. I cut one lengthwise, so we could get the apple shape. The other I cut crosswise, so we could have circles with the pretty star shape in the middle.

I grabbed a few of our craft sticks and stuck them in the apples to make the stamps easier to handle. After pouring out a couple of colors of paint, we were ready to go.

The girls were quite excited to see this; their patience barely held on to let me take a few seconds to snap this photo. (Can you see the little finger peeking off to the side?) 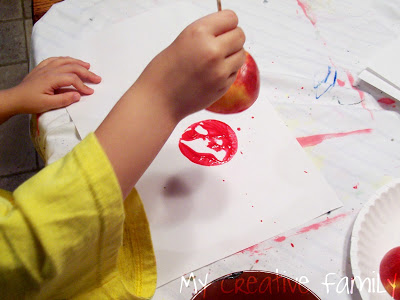 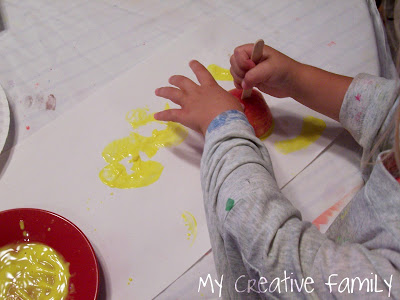 And, they were off! If you’ve never tried this project before, I’d greatly encourage it. All it takes is a couple of apples and some paint.The girls loved the novelty of using food to stamp and had a lot of fun making the different shapes and even mixing the colors.

Both were able to work on this project without any help from me. 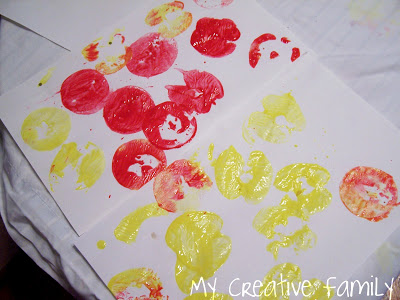 In the end, we had a lot of fun and some great prints.I’m planning on getting out my clear contact paper and turning these into autumn placemats. We’ll have enough for everyone in the family!

Have you tried apple stamping before? 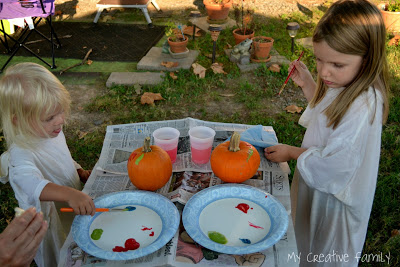 In case you ever wondered where my artsy/crafty side came from, I’d have to say I come by it naturally. My mom loves to come up with wonderful projects for the girls too! 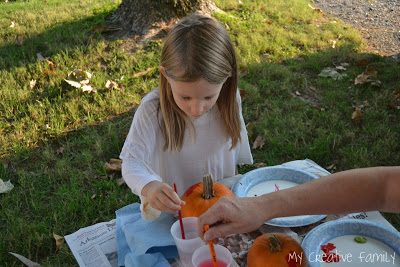 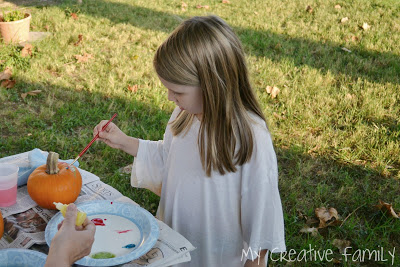 The girls decided to paint a couple of masterpieces. They considered their colors, applied it meticulously and painted more carefully than I’ve ever seen them. They did not get a speck of paint on themselves or the newspapers! 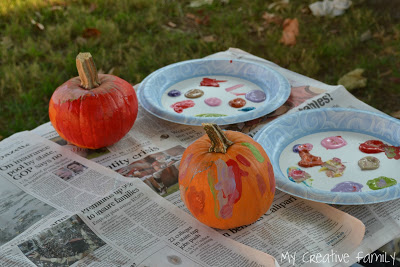 In the end, we had a couple of beautiful pumpkins and the girls had a great time creating art with their Granny. 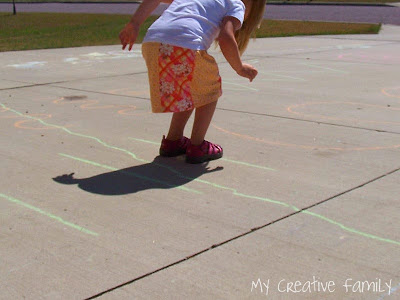 I’ve been toying with the idea of making an obstacle course for the girls all summer. But, for one reason or the other, it never happened.Perhaps it was a lack of ideas or maybe just a bit of summer laziness, but nonetheless, it never happened.

That is, until inspiration struck and I realized “hey, I can make an obstacle course with just a bit of sidewalk chalk!”

I got out all the sidewalk chalk and took over our driveway. First, I started with straight lines that the girls had to jump over. They then moved on to a curvy line they had to walk (or run) along. 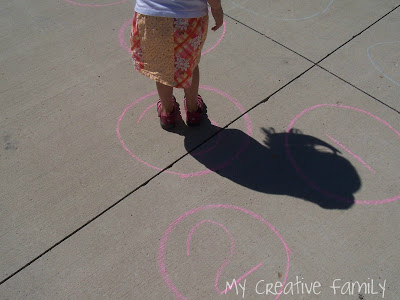 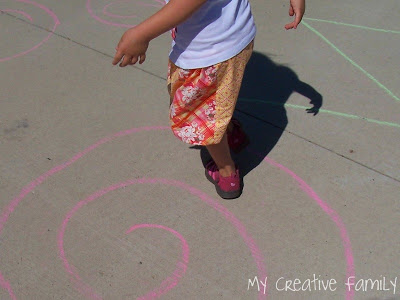 Next up was the spiral. They started from the outside and followed the lines to the middle.Then, they had to walk (or run) along the zig-zag line.

At the end was a series of squiggly lines to jump over, they they followed an arrow back to the beginning. 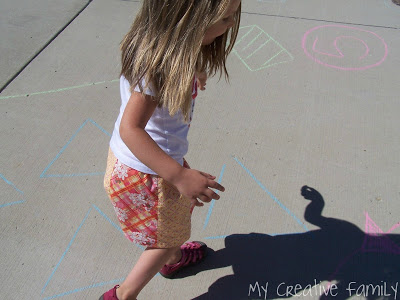 We had lots of running, giggling, jumping and sometimes losing our balance.Best of all, we had fun. The best part for me was that the possibilities are endless and the best part for the girls was that it was a lot of fun! 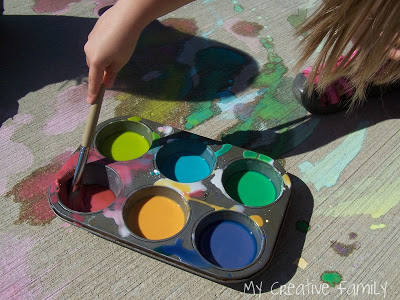 Today, we took our art outside! The girls have been wanting to spend as much time outside as possible since the weather has been absolutely perfect.

I had planned on doing sidewalk painting during our art week anyways and this was the perfect day for it.

This is one of those projects that everyone is doing. Of course, everyone is doing it because it’s tons of fun and easy to prepare too! I used this post by Pink and Green Momma for inspiration and to find out how to make the paint.

The combination that worked well for me was one part cornstarch to one part water. I was also very generous with the food coloring. Keep in mind when making sidewalk paint, it will dry lighter and will also look chalky, thanks to the cornstarch. 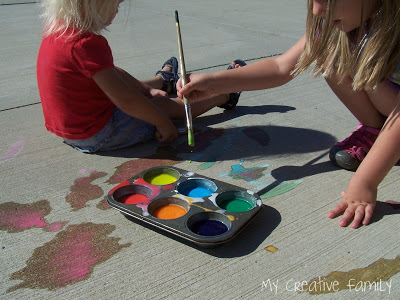 We had great fun and I wished I had brought a paint brush out for myself. The paint was just way too tempting! We painted blobs and lines, circles and splotches. We learned that splatter painting was kind of cool and even made a few rainbows. 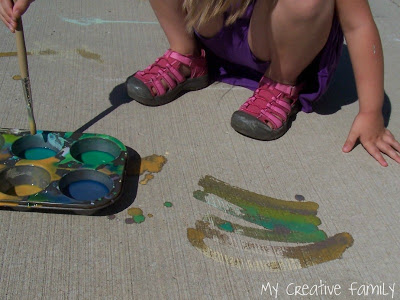 Our colors got all mixed up.Yellow turned to lime green and blue turned to teal. Of course, that just added to the fun!

And when we were all done, we took the muffin tin full of the leftover paint (which actually wasn’t much) and tossed the paint out onto the driveway. Splatter painting at its best! 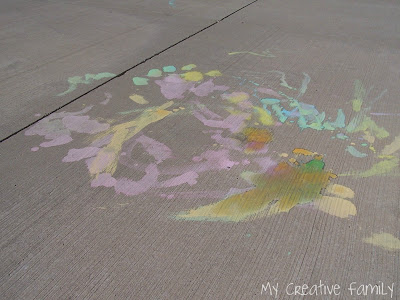 This project was fun, cheap and relatively easy to prepare. We’re definitely going to do this again and again!

Creative Family Fun uses cookies to improve your experience. These cookies provide feedback to our analytics and advertisers. We use the information to track views of the site, where you go and to know if you are a regular visitor or brand new as well as provide a personalized experience where possible. We'll assume you're ok with this, but you can opt-out if you wish.Accept Reject Read More
Privacy & Cookies Policy
Necessary Always Enabled