4th of July Crafts and Activities

Do you like to decorate for the 4th of July? I always want to, but I don’t always get around to it.

July 4th will be here before we know it, so the girls and I decided to work together to create a fun 4th of July bunting for the holiday, so at least we’ll have something to display. 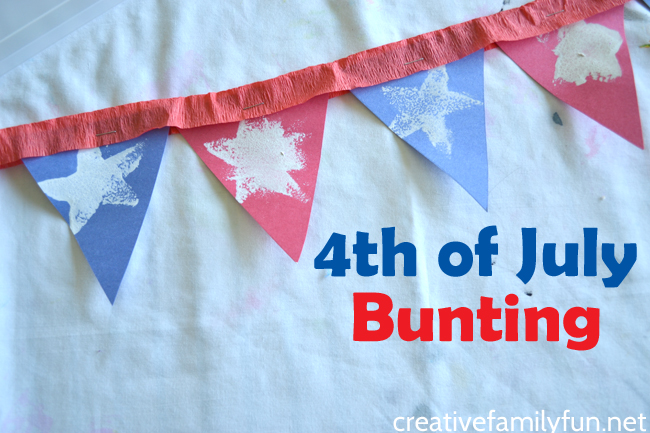 We made this festive and very patriotic bunting with a few simple supplies. The process was so simple and the results were fun. 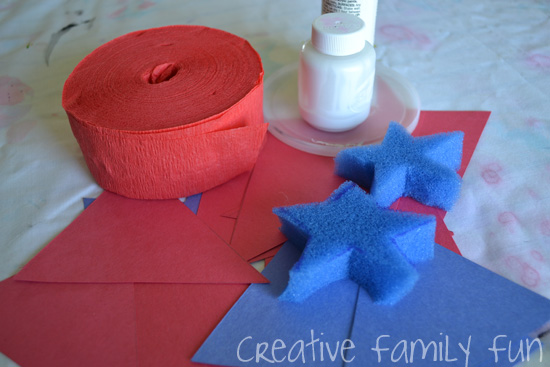 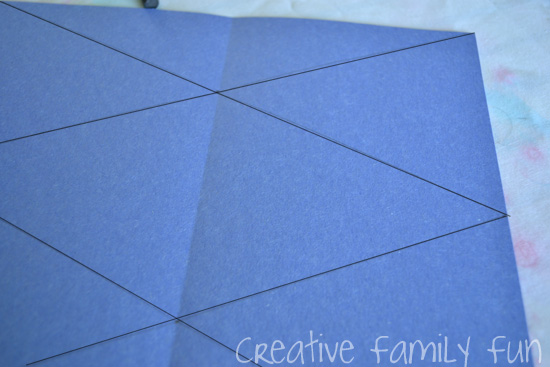 How to make your 4th of July bunting

Before beginning the project, I cut the construction paper into triangles.

One sheet of blue and one sheet of red paper provided us with many triangles.

I folded the paper in half lengthwise, then drew my triangles. I highlighted my lines in the above picture so you could see how I drew my lines. I cut along all the lines as well as cutting along my folded line down the middle.

Once they were all cut out, the girls were ready to start making stars. 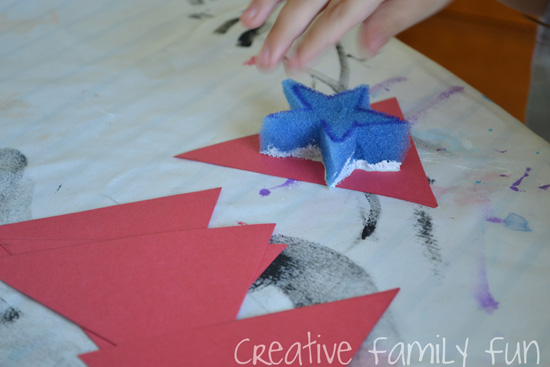 We used our sponges to stamp one star in the middle of each triangle.

Then came the hard part, waiting for them to dry! But, they did look pretty all spread out on the table! 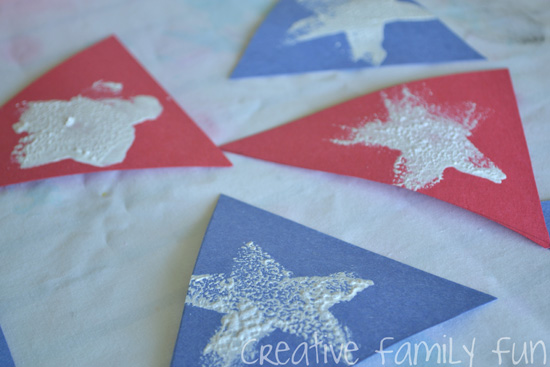 Once everything was dry, we sorted our triangles so that we had a red/blue/red/blue pattern.

We took the red crepe paper and folded it in half. We put one triangle into the fold at a time and stapled it into the crepe paper (see picture below).

We lined the triangles up side by side with the pointed side down to get the bunting look. 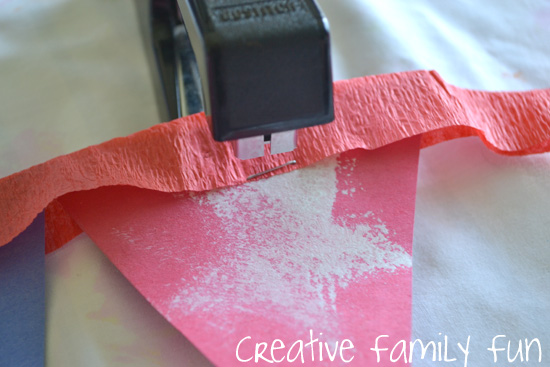 Now, we’re all ready to decorate! We’ll hang our 4th of July bunting and display a few flags for a fun and festive holiday.

Do you like to decorate for the 4th of July? 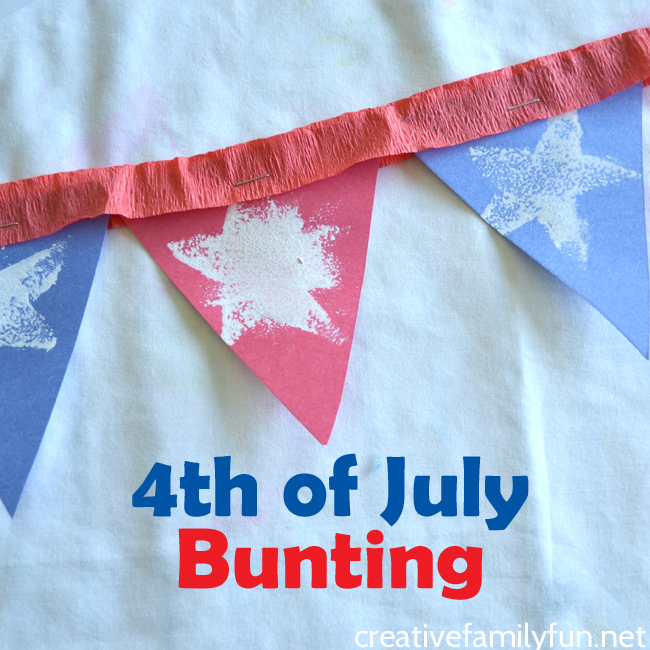 If you enjoyed this patriotic craft, the above photo is perfect for sharing on Facebook or you can save the photo below on Pinterest. 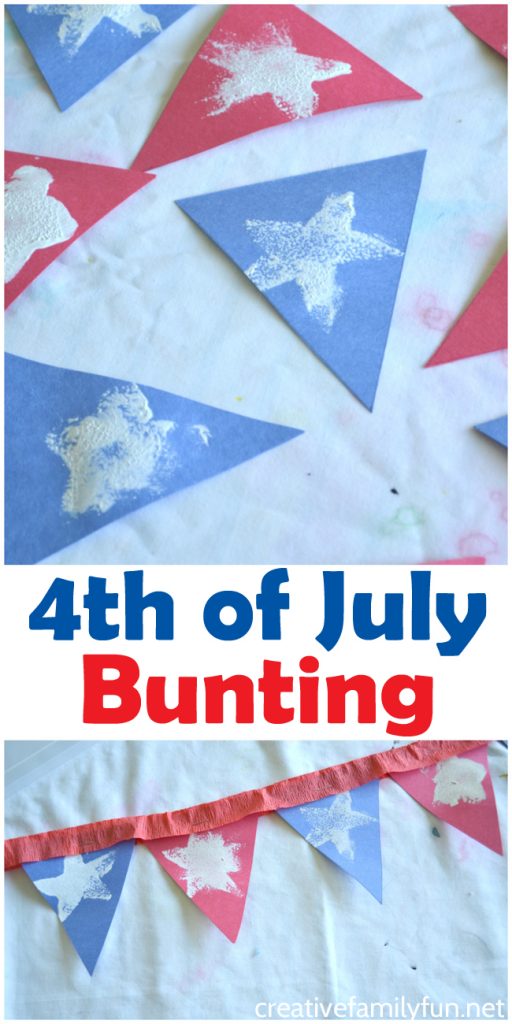 You may also like one of these summer craft projects:

4th of July Noise Maker at Mess for Less

No trip to New York City is complete without a trip to see the Statue of Liberty.

So, as part of our virtual trip, we let the Statue of Liberty inspire a fun math experiment.

The question we tried to answer: how many Lizzies (or AJs) would it take to be as tall as Lady Liberty? To find out, we had to do some Statue of Liberty math. 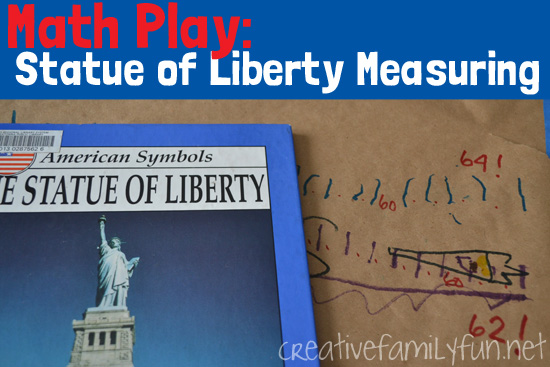 Learn about the Statue of Liberty

But, most importantly to this experiment, we also learned how tall it is: 305 feet. I got out the calculator and translated it into inches: 3660 inches tall. Then I measured each girl in inches. 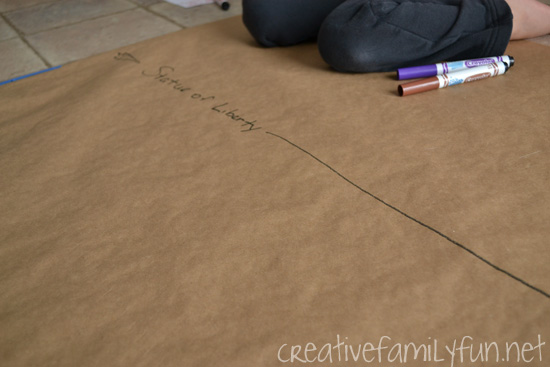 Next, using a roll of brown wrapping paper, we made a scale model of the Statue of Liberty at 36.6 inches.

Now it was time to measure.

We talked a bit about nonstandard units of measurement, because we weren’t going to use a ruler to measure. We were going to use ourselves. I made tiny squares to stand for each of the girls. (And when I say tiny, they were less than 1/2/”!) 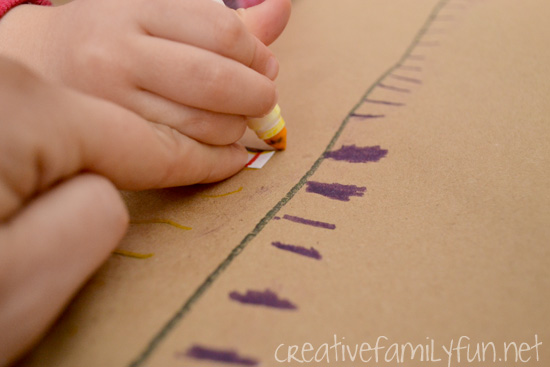 I showed the girls how to measure with their squares. We laid it down, drew a line along the top, and then placed the square on top of that line. They moved up and up and up until they reached the top.

When we were done, we counted our spaces. Lizzie topped off at 62, and AJ at 64. They were wowed! 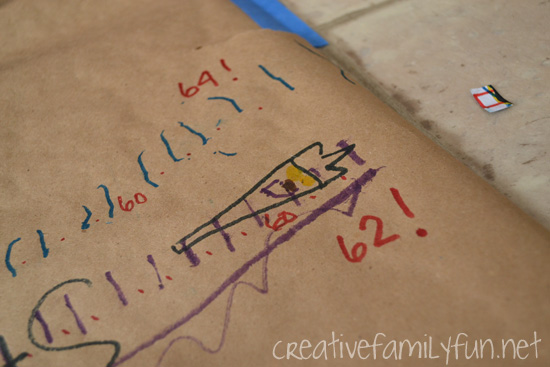 But were we correct?

Well, I’ll admit I expected we were not. The girls at 3 and 5 weren’t exactly precise. But, they did their best and definitely learned a lot. They were able to better visualize just how tall the Statue of Liberty is and they learned a fun lesson in nonstandard units of measurement.

How far off were we? About 10 units for each girl. Not bad for a preschooler and a Kindergartner using tiny pieces of paper! I think the next time we use nonstandard units, we’ll try measuring with our full bodies!

Have you ever measured with nonstandard units? Give it a try with this Statue of Liberty math activity.

You may also enjoy one of these New York City inspired activities:

Creative Family Fun uses cookies to improve your experience. These cookies provide feedback to our analytics and advertisers. We use the information to track views of the site, where you go and to know if you are a regular visitor or brand new as well as provide a personalized experience where possible. We'll assume you're ok with this, but you can opt-out if you wish.Accept Reject Read More
Privacy & Cookies Policy
Necessary Always Enabled