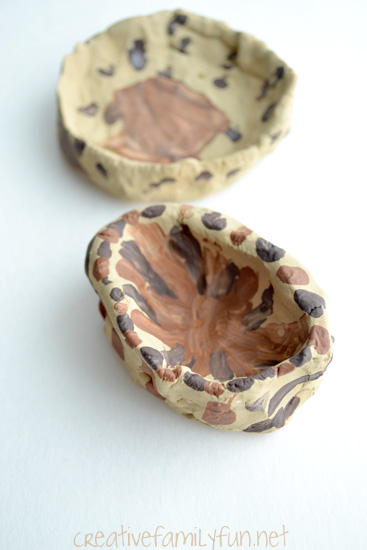 Our fifth stop in our journey around the world through art was Angola. Angola is located in south-western Africa. (You can see it on a map here.) The Portuguese began exploring and settling in Angola in the 1400’s. Angola was a Portuguese colony until it gained independence in 1975 following almost 15 years of warfare. Angola still faces extreme poverty and social problems today.
Despite a lack of books about Angola, we were able to find many resources on the web. We found a culture that was rich in art. We found beautiful wood carvings, like this intricately carved chair. We also found amazing baskets. (See some examples here.) All of these examples show how an everyday object can be made beautiful. We took our inspiration from those baskets to create our Angola art project.
Disclaimer: This post contains Amazon Affiliate links. Please see my disclosure for more details. 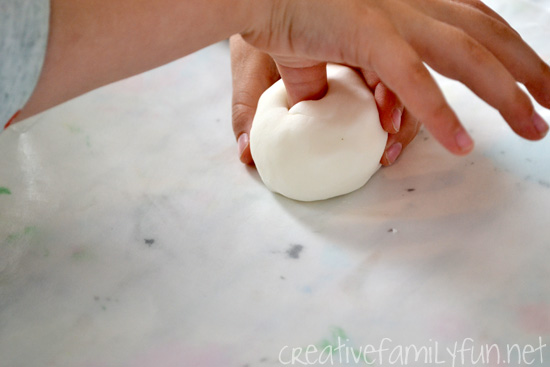 How can you make your own version of these baskets? That question had me thinking for awhile. We couldn’t actually make our own baskets, so I had to come up with an alternative. Finally, I settled on the idea of clay pots painted in the style of the baskets. My friend Cerys at Rainy Day Mum has a baker’s clay recipe that I’ve been wanting to try, so I made up a batch. Please click here to get the recipe. I followed her recipe exactly and had enough clay for both of our pots.

The girls found the clay very easy to work with. They made simple pinch pots to create their basket shapes. They tried several versions before they settled on their preferred shape. Plus, they just really enjoyed the feel of the soft dough and wanted to play with it for awhile. After they were satisfied, I put the pots on a foil-lined baking sheet and dried them in the oven. Do check on it frequently. Our pots dried quicker than I had anticipated. (We typically use salt dough which can take a very long time to dry. I loved that this dried so much quicker.) 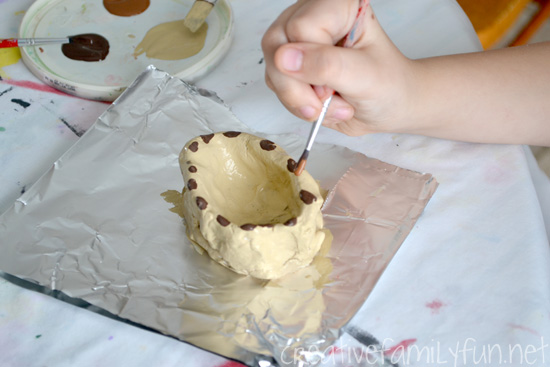 Even after the oven drying, we let our pots sit out over night to cool before painting. You don’t need to wait as long as we did. We were just busy and didn’t have a chance to paint until the next day. We used regular craft paint for our decorations. (This was the brand we used. Any similar paint would also work.) The clay was very easy to paint and we only needed one coat for full coverage. The girls used three different shades of brown for their designs. 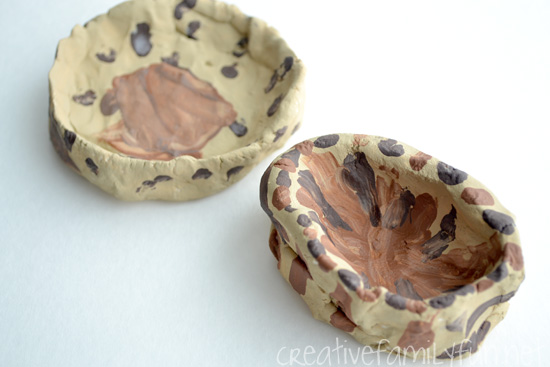 No, they’re not carbon copies of the Angola baskets we saw. But, I think the girls really captured the feel of the baskets. They enjoyed the process and made it all their own. Plus, we had a lot of conversation about how talented the basket-makers are.
I hope you’re enjoying our virtual trip around the world through art. If you would like to see details of this project, please see my introductory post. You can find all the previous projects we did here or by clicking on the graphic below. 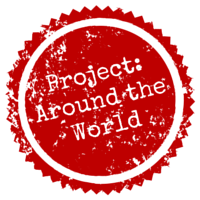 Terri is a writer and mom of two elementary-aged girls. She has a passion for learning and is always looking for ways to make learning fun. You can find her here writing about fun learning activities, art, craft, and family fun ideas.

Creative Family Fun uses cookies to improve your experience. These cookies provide feedback to our analytics and advertisers. We use the information to track views of the site, where you go and to know if you are a regular visitor or brand new as well as provide a personalized experience where possible. We'll assume you're ok with this, but you can opt-out if you wish.Accept Reject Read More
Privacy & Cookies Policy

This website uses cookies to improve your experience while you navigate through the website. Out of these, the cookies that are categorized as necessary are stored on your browser as they are essential for the working of basic functionalities of the website. We also use third-party cookies that help us analyze and understand how you use this website. These cookies will be stored in your browser only with your consent. You also have the option to opt-out of these cookies. But opting out of some of these cookies may affect your browsing experience.
Necessary Always Enabled

Any cookies that may not be particularly necessary for the website to function and is used specifically to collect user personal data via analytics, ads, other embedded contents are termed as non-necessary cookies. It is mandatory to procure user consent prior to running these cookies on your website.